Review: The Sky So Heavy 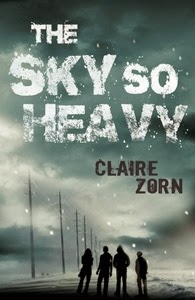 Title: The Sky So Heavy

Summary: For Fin, it's just like any other day - racing for the school bus, bluffing his way through class, and trying to remain cool in front of the most sophisticated girl in his universe, Lucy. Only it's not like any other day because, on the other side of the world, nuclear missiles are being detonated.

This book was disappointing in what's probably the most frustrating way - where it feels as though the author wasn't finished, as though there should be more.

The idea itself is one that will always draw me in - teens abruptly thrown into a dystopic landscape, their world collapsing in the aftermath of nuclear catastrophe. It's highly relevant to the world we live in and pretty believable, to be honest.

The main character in the book is written well, I didn't find it difficult to get into his head and picture how he's feeling, how his world goes from normal to something he doesn't recognise in a split second. He's protective of his little brother, and desperate to find his parents, and it's all written in a believable fashion. The other characters surrounding him are well fleshed out as well, with none of the vagueness that can plague a lot of books.

The problem comes from the world building, to be honest, and how the plot drags a bit. The first part of the novel revolves around two basic things: things suck, they don't know what's happening, they don't have much food and there's danger from other people. Which is all understandable, but it takes up far too much of the book, dragging out when I would have preferred to move on.

Then there's the whole concept of the fact that there's been a nuclear catastrophe, and I know that information is limited - but even when Fin has access to someone with information, his own mother, what we learn is just dribs and drabs, enough to keep up the structure of the book but not enough to be satisfying. We don't know how, why, who, etc, and I suppose that that might be the point, but that doesn't mean that I have to find it satisfying.

The thing that bothered me the most, though, was the ending - it seemed almost cruel and abrupt, after everything. There's no satisfaction or closure, though I can see that the author might have been trying for the 'you don't know what happens, but there's hope for the future' angle - but it's not conveyed very well, and the events immediately preceding the end of the book just meant that it left a bad taste in my mouth. I just wanted more, not to be left hanging, with a vague attempt at some sort of conclusion.

So, that's where I'm left with this book - the characterisation is great, but the plot and the world building could have used some work.

Posted by Kerri @ Whimsy and Parchment at 7:32 PM