Review: Painless by S. A. Harazin 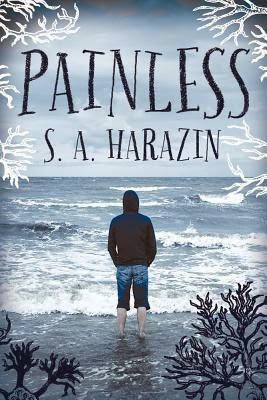 Title: Painless
Author: S. A. Harazin
Publisher: Albert Whitman & Company
Publication Date: March 1st, 2015
Genre: Young Adult, Contemporary
Rating: Three Stars
Summary: A first kiss. Falling in love. Going to prom. These are all normal things that most teenagers experience. Except for 17-year-old David Hart. His life is anything but normal and more difficult than most. Because of the disease that wracks his body, David is unable to feel pain. He has congenital insensitivity to pain with anhydrosis--or CIPA for short.
One of only a handful of people in the world who suffer from CIPA, David can't do the things every teenager does. He might accidentally break a limb and not know it. If he stands too close to a campfire, he could burn his skin and never feel it. He can't tell if he has a fever and his temperature is rising.
Abandoned by his parents, David now lives with his elderly grandmother who is dying. When David's legal guardian tells him that he needs to move into an assisted living facility as he cannot live alone, David is determined to prove him wrong. He creates a bucket list, meets a girl with her own wish list, and then sets out to find his parents. All David wants to do is grow old, beat the odds, find love, travel the world, and see something spectacular. And he still wants to find his parents. While he still can.
Review:
What an odd, melancholy book this was.

David is a teenager with CIPA, a genetic condition that means that he doesn't feel pain, and he also doesn't sweat. His whole life has been a journey of having to be careful, worrying about hurting himself, and knowing that he puts those around him through difficulties due to his condition.

The book takes us on an exploration of what life is like for David - the way his social skills have suffered, his tenuous relationships with his guardian and friends, his reliance on his grandmother, who just might be the one person in the world who doesn't look at him and just see his condition.

With the threat of being put in assisted living looming over his head, David wants to live his life and accomplish all the things that normal teenagers dream - meet a girl, live on his own, swim in the ocean. The sort of bucket list that's pretty average, except that David's condition makes it anything but average.

The story is a mixture of romance, growing up, angsty road trip and self discovery, and surprisingly enough, it worked okay for me. I'm generally not a fan of road-trip books - I don't know why, but just hearing that a book has a road trip is enough to turn me off a bit. This story worked for me, though, maybe because I can identify with the kid who doesn't know why their parents didn't want them.

There were parts of the book that didn't go over so well, though. It honestly dragged in spots, and I found himself wondering where it was going, and what the point was, and when we were going to get there. The ebook copy I have is 300 pages and I feel like a good 50 should have been shaved off, or more content should have been added. It meanders and I wasn't really sure what the point was, even though I think that the author was aiming for a general story of growing up and self discovery. I shouldn't wonder that, though, the book should make it clear to me.

The ending also just left me kind of cold, to be honest... On one level, I get that it's a moment of self discovery for David, and it's about independence and self-reliance. The climax of the book actually worked for me, in that way. But then I got to the last few pages and I was just sort of left wondering what I'd just read, and was that really the ending? I don't know. It's the sort of non-ending that can be executed well, and I can see the attempt here, but it just didn't work for me.

Overall, I'd say that it was 'okay', but not really a book I would consider rereading. The meandering and the weak ending will push it down many people's lists, I think.

I received a copy of this book through Netgalley in exchange for an honest review.
Posted by Kerri @ Whimsy and Parchment at 10:27 PM