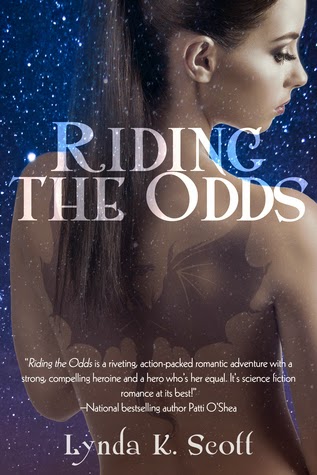 Summary: Spaceship captain Tara Rowan has her secrets. One is her Rider, Zie. Zie is an organic symbiote—like a living tattoo—that enhances Tara's physical abilities, including superhuman strength and reflexes. The other is the past she's tried so hard to leave behind her. But it's not until oh-so-sexy Trace Munroe decides to blackmail Tara that she realizes her secrets aren't so secret after all...

Trace is a Holy Knight who does everything by the book. Desperate to find a missing princess, he'll do whatever it takes to rescue her and bring her kidnappers to justice. Including blackmail. Yet something about the feisty ship captain draws Trace in and stirs his desire—even if she is a wanted criminal. Because the last thing he needs is any complications...especially when he has his own secrets to hide.

Look at the cover! *_* I am such a sucker for covers, honestly, that's what made me want to pick up this book.

Riding the Odds was such an interesting combination of romance and sci-fi, I quite liked the contrast, to be honest. Let's start off with part of the description:

Spaceship captain Tara Rowan has her secrets. One is her Rider, Zie. Zie is an organic symbiote—like a living tattoo—that enhances Tara's physical abilities, including superhuman strength and reflexes.

I LOVED the idea of a living tattoo, and throughout the book it's honestly quite fascinating. Right away I was intrigued because it reminded me a bit of Harry Potter (though off the top of my head, I can't remember whether moving tattoos was canon or fanon). Mix that with a little intrigue and a little romance and that's the way to get me interested in a story!

I loved the character of Tara. She's got a mixed past and vulnerability, but she's also brave, smart and caring, too. The relationship that she has with Zie, her Rider, was a pleasure to read - although Zie has an almost childlike quality, it's obvious that she is very intelligent and cares about Tara quite a bit. She's strong and the two of them are mutually dependent and make for quite the fearsome duo, which I loved. Especially when it comes to romance, which so often just focuses on the guy being brave and strong and rescuing the woman and less on having her be amazing in her own right.

Now this brings me to my next two points, which were regarding the plot and the romance. First of all, I found the story pretty interesting. Trace is searching for his missing sister and that happens to bring up a lot of things that Tara thought she had left behind a long time ago. Along the way we learn about a fascinating world that Lynda K. Scott has built, the Riders, and the story twining it all together. I think my biggest complaint is simply that it took too long. I just didn't feel that this book needed to be 350 pages, there were bits along the way that could have been cut or trimmed and the story still would have maintained its integrity.

As for the romance, while I enjoyed bits of it, to be honest in some ways it was the weakest part of the book. Trace and Tara's attraction was overemphasised and made me roll my eyes more than once, and sometimes the descriptions were just too much. (Heart shaped rear? Eyes sparkling with jade and amber and chocolate? Yeah.) They both repeatedly tell the reader how very attracted they are to the other, and the descriptions really just went on for too long, and it's something that detracted a bit from my enjoyment of the book.

Overall, though, I did enjoy this book. There's chemistry between the two main characters, an interesting story to be told, and a fascinating world that they're living in. I'm definitely glad that I picked this up!

Disclosure: I received a copy of this book through Netgalley in return for an honest review.
Posted by Kerri @ Whimsy and Parchment at 8:06 PM