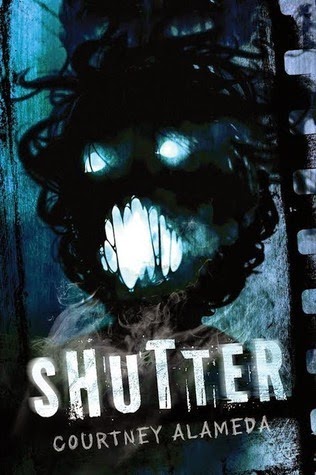 Summary:
Micheline Helsing is a tetrachromat—a girl who sees the auras of the undead in a prismatic spectrum. As one of the last descendants of the Van Helsing lineage, she has trained since childhood to destroy monsters both corporeal and spiritual: the corporeal undead go down by the bullet, the spiritual undead by the lens. With an analog SLR camera as her best weapon, Micheline exorcises ghosts by capturing their spiritual energy on film. She's aided by her crew: Oliver, a techno-whiz and the boy who developed her camera's technology; Jude, who can predict death; and Ryder, the boy Micheline has known and loved forever.

When a routine ghost hunt goes awry, Micheline and the boys are infected with a curse known as a soulchain. As the ghostly chains spread through their bodies, Micheline learns that if she doesn't exorcise her entity in seven days or less, she and her friends will die. Now pursued as a renegade agent by her monster-hunting father, Leonard Helsing, she must track and destroy an entity more powerful than anything she's faced before . . . or die trying.

Lock, stock, and lens, she’s in for one hell of a week.

Review:
I am so glad that I didn't let myself be deterred by the cover of this book, because it is awesome. So please, give it a chance even if the cover deters you like it did me! (Side note: now that I have read the book I love the cover, so you can take that into consideration as well!

I'm going to be honest, it takes a lot for a horror book to work, for me. So much of the horror experience for me is atmospheric - the visuals, the setting, the tension slowly building through dramatic music, etc. Often when I encounter a 'scary' book, unless it's actually short stories or something that quickly gets the point across, it just doesn't work for me. I say this as someone who loves horror, too - a tragedy of my life, as most of my close friends don't like it at all! Tragedy :(

Anyway, to get back to the point... Luckily enough, however, Shutter more than met and even exceeded all of my expectations!

There's so much to love about this book. There's a fully realised, vulnerable, brave heroine who kicks ass and takes names and is fierce and protective of those around her. Then there are the trio of boys/men around her and the close friendships that she has with them without too much romance (though there is some!) Basically, there's a whole lot of fantastic character building that helps us really get into the book and get to know who we're reading about and why we should care about them, and what their story is - not just in the book, but before, too. I always think that it's so important for a reader to be able to imagine the world of a book outside of it - to picture what could go on before and after the cover is opened, essentially. That probably sounds weird, but that's how I think about it.

Then there's the world building, and it's so freaking cool. There's a lot of familial history and background built into the core of the story, shaping everything - and then there's awesome technology and really cool lore and monsters, too. I love this sort of stuff. Give me a world that actually makes sense and holds up to some scrutiny and I will be a happy camper. There are some great creepy moments where you might think 'Oh crap' and then wonder just how Micheline doesn't just turn tail and run, even with all her training.

Then there's the story, and it's just so thoroughly enjoyable from beginning to end. We have murder and mayhem and action, tragic backstory and witty, annoying friends, a romantic hero and a bruised parental relationship that needs to be mended. And overall, an arc for our heroine that will help her grow and heal and actually move on from all of the crap that she's been put through in her life, a realisation of who she is, and what she's capable of in a good way.

Also, because it really needs to be said, did I mention action? The stuff that goes on this book is just so cool, it'd actually translate pretty well as a movie, I think. There's stuff in there that I could imagine on the big screen in all its gory glory and it'd be fantastic. It's creepy and has the right tone to keep you turning the page.

There's just so much to love about this book, and that's why it has four stars. :D

Disclosure: I received a copy of this book through Netgalley in return for an honest review.

Posted by Kerri @ Whimsy and Parchment at 3:32 PM