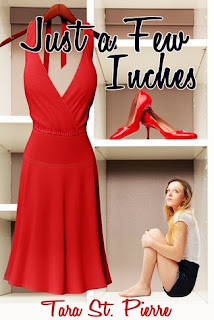 
Summary: All Carrie Roberts wants is to be a little bit smaller.

To fit into the perfect dress for the Valentine’s Day Dance. To look beautiful for her boyfriend, the school’s star basketball player. To keep his jealous ex-girlfriend, a rival cheerleader, away from him. And to be noticed by her classmates.

Exercising and dieting don’t work, but an advertisement for weight loss pills promises a quicker solution to her problem. As time runs out, she takes more than the recommended dose until she’s just a few inches slimmer. Heads turn when she arrives at the dance, and the wonderful night with her boyfriend is beyond what she dreamed it would be.

Days later, Carrie discovers that her body is changing in ways that should be impossible. While her doctor searches for a cure, she desperately turns to her friends and family for support. Everyone is noticing her now whether she likes it or not, and even the media is intrigued by her incredible story. Getting everything she once wanted has created new problems—problems that are growing more terrifying every day.

Because Carrie Roberts is shrinking.

Review: The moment that I read the summary for this book, I was intrigued. The issue of teens - both girls and boys - feeling the pressure to be something that they're not is something that has gotten a lot of attention throughout the years. Rather than the usual story, though, this had the hint of a promise of something more - a meld of contemporary and fantasy, but also actual issues that impact young adults.

In other words, I had to check this out.

All Carrie (we share the same name!) wants to do is a lose a few pounds. We've all been there, right? Her gorgeous boyfriend's ex is hanging around, and she just seems to be everything that Carrie isn't - the opposite of average, the label that Carrie is so incredibly tired of. She wants to stand out and impress people. A few weight loss pills, a few lost pounds... It's the perfect solution for the perfect dress that Carrie wants to wear to go out with her boyfriend in a few days, and with the added bonus of making her feel better about herself and show up Todd's ex, Janelle.

It sounds so simple, right? This isn't your average young adult novel, though, and we're not headed down the path that you might expect if you haven't paid close enough attention to the summary. It seems as though everything is going to plan, until Carrie realizes that she's not shrinking in, she's shrinking down.

This is the point where the book starts to become interesting and it's an approach that I really admire the author for taking, because it's unique. Body image issues are not something new in the world of young adult, but this particular approach is. I actually quite like it - it adds a bit of intrigue and mystery that balances a look at the concepts of self esteem and self image with a bit of medical/science fictiony drama, set against a backdrop of normal highschool life with all the drama and social media back and forth that's so common now.

By her side throughout the book are Carrie's two friends, Laura and Trish - and her boyfriend, Todd. After all, where would we be in YA without friendship and a hint of romance? Todd is the catalyst to a lot of the issues that are explored throughout the book, both someone Carrie clings to and yet struggles in terms of defining herself at the same time. Lauren and Trish aren't without their issues as well - there are times when Carrie wonders if Trish is her friend or her fan, and moments when she struggles with the way that Lauren pushes her to look beyond just her own problems, her own insecurities. Still, the three of them are pretty much inseparable, and it's clear that Carrie heavily relies on their support and caring.

There are weak moments in the book - I would have loved to learn more about why Todd and Carrie were together, even though I could understand why their relationship took a backseat to the events of the book. I also sometimes felt as though Lauren's behaviour didn't quite make sense for a teenager - we've all known that friend that gets a bit preachy and up on their soapbox, so that's not what I had an issue with. It was just more that it didn't quite ring true, somehow. It seemed to be the primary facet that we got to see about Lauren, though I have to admit that she was supportive of Carrie throughout - I just would have liked something more, I guess, a hint of who she was beyond the look that we got at her throughout the book.

This soap-boxy feeling was what I noticed at times in other areas of the book, and why I knocked the rating down the half star from 4 to 3.5. I really enjoyed the story and the ideas that were presented, it's just that at times I felt as though I was being preached to, which I didn't quite like. Others may not mind this tone at all, though!

In spite of these two small issues, I really enjoyed this book. I think that it's unique and refreshing, and I liked the lens that the author used to explore a very common problem and issue that will resonate not just with teenagers but also with adults, whether as memories of when they were teens or how they're still feeling. The book also has more depth than many - we actually learn more about the so-called antagonist, which I really liked - too many books don't take the time to delve into this sort of character, or have a comeuppance involved without us ever learning more. It's also neither purely contemporary or purely fantasy or dystopia - something else that helps it stand out.

So, to sum up - a traditional young adult story of self image and self discovery, set in a contemporary fantasy scene, with friendship and a hint of romance. Worth checking out, in my opinion!

Disclosure: A copy of this book was provided by the author in exchange for an honest review.
Posted by Kerri @ Whimsy and Parchment at 8:56 PM