Review: The Adventures Of Jillian Spectre, by Nic Tatano 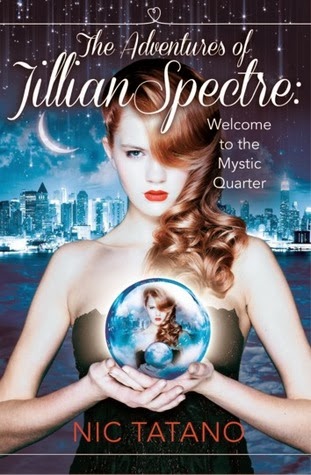 Summary: Welcome to the Mystic Quarter...

Jillian Spectre knows what happens after you die.

Because the seventeen-year-old mystic seer can see the future of her clients even after they've passed on. And that's not even her coolest power...

She can be in two places at once. Problem is, her heart can only be in one.

Supernatural abilities aside, she's a typical high school senior torn between two guys. But that gets put on the back burner when she discovers the father she had long assumed was dead is actually alive, with unique powers of his own. He's a technopath, with the ability to interface his mind with technology. And he's got a plan to take down society.

Unless Jillian can stop him.

I really wanted to like this book more than I did. I mean, come on! A girl who can read minds? A gorgeous cover? Count me in, I love that sort of stuff. But instead of the fun book I wanted, I found myself getting increasingly bored/frustrated as the book went on, and I ended up skimming a rather large chunk of it.

That said, I have a feeling that this book should be geared towards the younger end of the YA scale, so people should keep that in mind when considering this book.

There's a lot of stuff about this book that may seem highly unbelievable to anyone who sits and thinks about it a little - everything from the dialogue, the way the teens interact with each other, to the overall world that these characters live in. When I think about it, I'm sure that there are a lot of books that I read when I was younger that didn't really have any sort of logical explanation, but I guess it stands out a lot more when you're rereading the book as an adult.

The idea itself is a good one - take a teen who can see into the future and has a few other powers, and follow her adventures! Add in her friends who have their own abilities and a mysterious father and you have the makings for a fun little romp. Nothing wrong with that.

It's just that the execution is what didn't work for me. For one, the writing made me think a bit of Joss Whedon on overdrive - that patently obvious desire to be cool, to have the sort of language that kids will want to read. Apparently Jillian thinks in constant wisecracks and witticisms, and while I appreciate the humour, after awhile it became a bit grating. Maybe some people think in constant comparisions and stuff, but it just didn't feel realistic for me.

I didn't really like Jillian all that much, if I was honest, though maybe that's just because she's a typical teen: simultaneously full of herself and yet doubting herself all the time. Her characterization was all over the place, for me, and again, the dialogue didn't help when she was being snarky all the time. I love me some snark, but I want to see the true depths of the characters, too, and I didn't feel that there was any real depth to Jillian or her relationships.

There are three other main teen characters in this book besides Jillian, and I didn't really feel that we learned all that much about any of them. We know that she lusts after two of them, and that Roxanne is her best friend, but I would have liked more depth, particularly with Ryan and Jake. I know that instant lust does happen when you're a kid - hey, I was victim of it myself - but there still has to be some sort of connection to justify a relationship. Saying that they all grew up together isn't good enough.

This book also suffers from having, well, too much going on, and not all of it well executed. It revolves a lot around Jillian's missing father and her abilities, but then there's also the abilities that her friends have, angels, a connection to hell, mental connections to phones, etc, etc. It felt very disjointed as I read. Idk. Maybe I just wasn't in the right frame of mind, though I kept reminding myself to think of the book as lighthearted and fun.

Several times I found myself questioning just what was going on, or worse - not caring. We didn't learn anything about the true motivations of the story's main villain, or how exactly he was implementing his nefarious plans - it seemed like we were just supposed to accept what was going on without questioning it...

So again, this might be better for the younger end of the YA scale. The premise itself is cute and will appeal to younger readers.

Disclosure: I received a copy of this book through Netgalley in return for an honest review.
Posted by Kerri @ Whimsy and Parchment at 6:17 PM