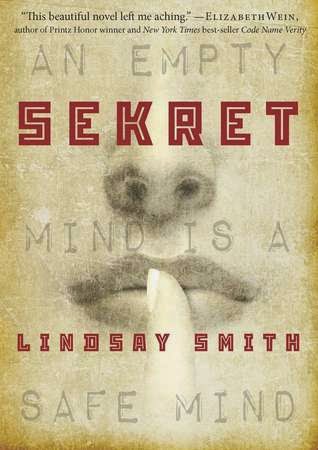 Summary: An empty mind is a safe mind.

Yulia's father always taught her to hide her thoughts and control her emotions to survive the harsh realities of Soviet Russia. But when she's captured by the KGB and forced to work as a psychic spy with a mission to undermine the U.S. space program, she's thrust into a world of suspicion, deceit, and horrifying power. Yulia quickly realizes she can trust no one--not her KGB superiors or the other operatives vying for her attention--and must rely on her own wits and skills to survive in this world where no SEKRET can stay hidden for long.

Review:  I really wanted to enjoy this book a lot more than I did. :/

Set in the 1960's, Sekret tells the story of Yulia, a girl with psychic powers in the time of Soviet Russia. Her father raised her to believe that suppressing her emotions and emptying her mind is the way to keep herself and her family safe, but all that comes to an end when she's captured and made to work for the KGB as a spy.

Yulia is a stubborn, determined character, and I admired that about her. She never really gives up - she retreats and pretends to cooperate for the chance to see her family, to continue planning and to stay safe, but she never really gives in to the position that she finds herself in.

The premise is intriguing - kids captured and forced to work as spies, with the constant threat and pressure of their minds being read by the others, thoughts and traitorous desires betrayed. Psychic powers have fascinated me since I was a kid and I read Escape to Witch Mountain, and that's one of the reasons I was drawn to this book. They're not a unified group, either, set against their captors - the way many of them betray each other reminds me a bit of the Hunger Games, where the situation forces them all to turn on each other.

I'm pained to admit that I found it hard to get through this, however. I don't know what it was about the writing, but it seemed to plod along. I started to read this months ago and set it aside because it wasn't particularly grabbing me and the release date was so far off... I was hoping that I would enjoy it more when I picked it up again, but sadly that was not the case. There were plenty of action scenes and missions but they didn't suck me in, somehow - I didn't feel the sort of connection with Yulia that I would have liked to.

Another thing that rubbed me the wrong way is the men in Yulia's life consistently making decisions for her - for her own good, of course. It's not as though she takes it lying down, admittedly, but she also doubts whether her own decisions were the right thing to do, so it just leaves me with a bit of a sour taste. There's a bit of a love triangle but I...didn't really care who she ended up picking, I have to admit.

I guess I could summarise my reaction to this is that the book was a bit too dry, without the emotional connection that really makes you form an attachment with the characters and the plot. There's nothing technically wrong with the writing, and it's written well, but it just didn't work for me.

Disclosure: A copy of this book was provided through Netgalley in return for an honest review.
Posted by Kerri @ Whimsy and Parchment at 6:15 PM