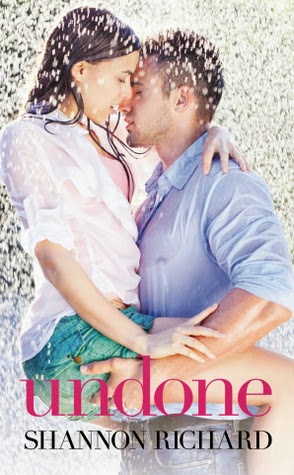 Why wearing red shoes makes a girl a harlot
Why a shop would ever sell something called "buck urine"
Why everywhere she goes, she runs into sexy-and infuriating-Brendan King

After losing her job, her apartment, and her boyfriend, Paige has no choice but to leave Philadelphia and move in with her retired parents. For an artsy outsider like Paige, finding her place in the tightly knit town isn't easy-until she meets Brendan, the hot mechanic who's interested in much more than Paige's car. In no time at all, Brendan helps Paige find a new job, new friends, and a happiness she wasn't sure she'd ever feel again. With Brendan by her side, Paige finally feels like she can call Mirabelle home. But when a new bombshell drops, will the couple survive, or will their love come undone?

Review: 2.5 stars. A fluffy book that tries to be a bit more than the average romance but doesn't quite get there.

Paige is down on her luck when she moves back down south from Philadelphia, bruised from losing her job and the man she thought was the love of her life. Quick to anger and prickly, she finds it hard to fit in now that her parents are living in a small town where life moves a little slower.

Then she meets Brendan, who infuriates her but makes something kindle inside her, and of course, sparks fly.

I get the idea that Richard didn't want to write just the typical boy meets girl, angst happens, they end up together sort of romance. I respect that, but the book felt a little haphazard in ways, with several underlying plot lines being brought up as ongoing obstacles for Paige, but not necessarily resolved by the end of the story. Not everyone is as welcoming to Paige as Brendan, and small towns aren't without their creeps, either.

Some of the conflict actually happens after Paige and Brendan are happily engaged and even married, which I don't really mind - not all romance novels need to have these milestones be the reward at the end! However, this book fell victim to what I refer to as the whirlwind-romance, and it would have been nice if there had been a little bit more depth to the interaction at the beginning of the book, instead of the feeling that the relationship is developing mostly because of chemistry.

The tragedy in the book felt a bit shoehorned in, almost, a way to insert the conflict that almost separates the couple at the end of the story. It still touched me, though - pancreatic cancer is nasty, and it's taken two of my family members. Seeing Trevor and his family members struggle with its reality made me sad, though the time spent on the progress was not what he deserved, in my opinion.

I do feel that some more time spent on fleshing out this book and really developing it could have been so worthwhile. The outlines are there already, they just need some editing and work - the book could have been a really solid story if it hadn't clung so much to the romantic outline, and instead put more meat into the plot. Some of the conflict felt a bit repetitive as the book went on.

Enjoyable as a light fluffy piece to read for pure entertainment, but don't look for the depth that some great romance books can bring.

Disclosure: I received a copy of this book through Netgalley in return for an honest review.
Posted by Kerri @ Whimsy and Parchment at 12:13 AM