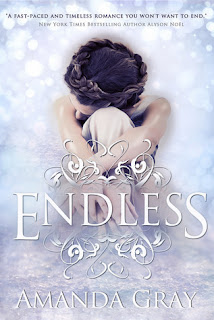 Summary: When she befriends Ben Daulton, resident new boy, the pair stumble on an old music box with instructions for “mesmerization” and discover they may have more in common than they thought. Like a past life.

Using the instructions in the music box, Ben and Jenny share a dream that transports them to Romanov Russia and leads them to believe they have been there together before. But they weren't alone. Nikolai, the mysterious young man Jenny has been seeing in her own dreams was there, too. When Nikolai appears next door, Jenny is forced to acknowledge that he has travelled through time and space to find her. Doing so means he has defied the laws of time, and the Order, an ominous organization tasked with keeping people in the correct time, is determined to send him back.

Review: First of all, isn't this cover gorgeous??? One of the things that drew me to the book! I think it's just beautiful, and it really suits the haunting, poetic tone of the book.

Endless is a beautiful story that drew me in from start to finish, leaving me wanting and hoping for more from the author with the same main character. A mix of intrigue, mystery and romance all bound up together was enough to keep me turning the page.

The story centres around Jenny, a teenaged girl who has the power to see glimpses of the past when she touches someone - something that she has always tried to hide.

I really enjoyed the writing in this book. The description is beautiful - the imagery is intense, painting a picture in your mind's eye as you read. Most authors include description, but Amanda Gray shows that she has a talent for it, here - there was a point where the shade from trees was described as lace, and that is the sort of thing I love, the comparisons that make you look at nature and your surroundings in a new way.

From the start I found that I could really empathise with Jenny - she's never known her mother, and she loves her father but feels that what he hopes or wants for her is different than what will make her happy. She wants to make him happy, though, so she tries her best. She doesn't have many friends, and we see her grow to a better understanding of the word throughout the book - what it means to be a friend to someone, and what they might want from her, what friends can do for her just because of the friendship they share. It adds to the emotional depth of the book, and I liked seeing it.

Her friendship with Ben was especially well done, building up slowly - it's so rare that you get to see a slow buildup of relationships in books now, it seems, that it was really nice to read and see it building, so slowly that neither of them are aware of it until they come to the sudden realisation. The sad part is that in comparison, Jenny's relationship with Nikolai falls short - it seems to be based on the physical attraction that her counterpart Maria had for him, but beyond that I couldn't find a basis for it, if I was honest. I found myself rooting for Ben more than I did for Nikolai, because I can't see what they have going for them beyond the 'meant to be' trope.

The mix of magic and time travel intrigued me, here - the idea of time travel being scrutinised and controlled made sense to me, and the idea that time travel would have consequences was a breath of fresh air in comparison to some of the other tropes out there right now.

The one thing that bothered me was that the book ends rather abruptly, and I'm not sure whether it's meant to be continued, or meant to be a self contained story - if it's meant to be self contained, then it's not quite satisfactory enough for me, to be honest. Too abrupt for Jenny and Nikolai's story, and it makes me worry that in comparison, Ben's story seems to be tied up in a neat little package, and also that I don't know what a second book would be about, other than more of the same. But the potential is there, so I'd read it.

All in all, four stars. One subtracted for the ending and the lack of depth in some of the relationships, but everything else was well done and beautifully written.

Disclosure: Arc provided through Netgalley for review.
Posted by Kerri @ Whimsy and Parchment at 12:05 AM