Review: Mine To Hold by Cynthia Eden 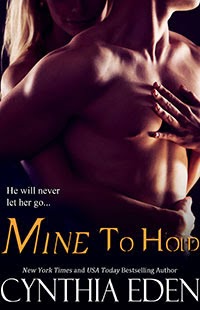 Summary: She was one man’s obsession…

Nine years ago, Claire Kramer’s lover brutally killed her family, and he tried to kill her. She escaped, but she’s been haunted ever since that attack. Too afraid to trust another man and too worried that her past will catch up with her, Claire never gets too close to anyone. But then she meets Noah York.

He must have her.

Noah York is a man with secrets. The world sees him as a billionaire hotel tycoon, but Noah has a dark and dangerous side. For years, he worked covert military operations before he built his fortune. When it comes to death, Noah is a master. He knows that he should steer clear of Claire, but the white-hot attraction Noah feels for the delicate beauty is instant—and consuming.

He will never let her go.

Someone else is just as consumed by Claire—someone who will kill to possess her. And if Noah can’t stop the hunter in the darkness, he may just lose the one woman that he can’t live without.

Review: I should note that this book is listed as part three of a series, but I didn't find anything missing that I needed to know ahead of time. It looks like it's one of those cases where romance stories are linked together, but not necessarily integral to each other.

I've been trying to read a little bit more romance recently, so when I saw Mine to Hold available on Netgalley, I just had to request it. The book tells the story of Claire - a woman who has endured far too much tragedy and fear in her life - and Noah, the businessman who's used to getting whatever he wants... And what he wants is Claire.


There's more than just the two of them and their romance, though, because danger is involved in this story too. Claire's already lost most of her family to tragedy, but now people are getting hurt again, and the two of them are at the centre of it. They need to find out who is after them, before that person finds them first.
The story interweaves the passion that sparks between Noah and Claire along with the mystery of just who is putting them in danger, and why. I did have my guesses as to what was going on, but there are enough surprises mixed in to keep things going, and a sense of real danger, too.

The romance was where things fell apart for me, just a little bit. Now, don't get me wrong, the sex is hot - the two of them obviously have chemistry, and that was just pure fun to read. It just felt as though things developed a bit too quickly for my tastes, in terms of where Claire starts off at the beginning and how quickly things move along. Of course, this is a book that's very much focused on the passion and the thrills, but I like that mixed in with just a little bit more reality, I guess you could say!

Throughout the course of the book Noah and Claire do learn about each other, though, which was something I liked to see. Lust without depth won't last, but the two of them have gotten to know each other - they've both had their vulnerable moments.

I would recommend this for anyone who likes their steamy sex mixed with a thrilling ride - there's still a lot to like here! I have a feeling Noah will be popular among a lot of readers.

Disclosure: I received this book through Netgalley in return for an honest review.

Posted by Kerri @ Whimsy and Parchment at 8:59 AM