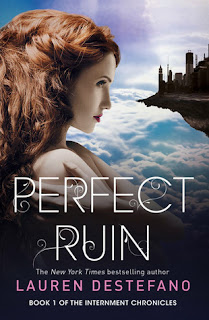 Summary: Morgan Stockhour knows getting too close to the edge of Internment, the floating city in the clouds where she lives, can lead to madness. Even though her older brother, Lex, was a Jumper, Morgan vows never to end up like him. If she ever wonders about the ground, and why it is forbidden, she takes solace in her best friend, Pen, and in Basil, the boy she′s engaged to marry.

Then a murder, the first in a generation, rocks the city. With whispers swirling and fear on the wind, Morgan can no longer stop herself from investigating, especially once she meets Judas. Betrothed to the victim, he is the boy being blamed for the murder, but Morgan is convinced of his innocence. Secrets lay at the heart of Internment, but nothing can prepare Morgan for what she will find - or whom she will lose.

Another gorgeous cover, with lovely writing to match.

The concept was what drew me to this book in the first place - an isolated society, set in a floating city in the clouds? Count me in! I always love reading new takes on how the human race would react to new situations, and this one was fascinating.

We see everything through the eyes of Morgan, a young girl who has always been tempted to know what lays beyond her city but wishes that she wasn't. Her family has already been rocked by one tragedy, and all she wants is for things to be normal.

The chain of events throughout the book take that option away from her, though, and that's where the dystopic elements of this society that Lauren DeStefano has built creep in. It's not just that we're dealing with a society that's been consigned to the clouds, it's what that society has done to live that is subtly creepy and a bit horrifying. It's presented in such a way that it's almost barely noticeable - dribs and drabs here and there throughout the book, but when taken together you realise just how far Internment has had to go to maintain their way of life.

Taking that into account, it's no wonder that Morgan yearns to know what lies beyond the city's confines - or that others do as well. Their question for freedom is what guides the book, and you can't help but want them to succeed, driven by curiosity as a reader!

The relationships in this book are extremely well developed, from Morgan's relationship with her brother, Lux, to her friendship with Pen and her blooming romance with her betrothed, Basil. So many books focus solely on physical attraction that I have a deep appreciation for when a writer takes the time to build depth rather than just focusing on lust. Then you have Morgan's relationship with her friend Pen - a friendship tested by their differences, but bound by loyalty. Truly nice to read.

The book ends off on somewhat of a cliffhanger than left me anticipating more - I'll definitely be picking up the next book!
Posted by Kerri @ Whimsy and Parchment at 9:54 AM