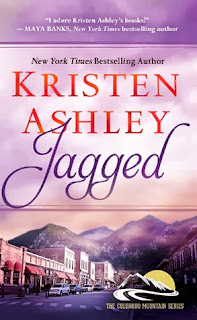 Zara Cinders always knew Ham Reece was the one, but he wasn't interested in settling down. When she found someone who was, Ham walked out of her life. Three years later, Zara's lost her business, her marriage, and she's barely getting by in a tiny apartment on the wrong side of the tracks. As soon as Ham hears about Zara's plight, he's on her doorstep offering her a lifeline. Now, it will take every ounce of will power she possesses to resist all that he offers.

Ham was always a traveling man, never one to settle down in one town, with one woman, for more time than absolutely necessary. But Ham's faced his own demons, and he's learned a lot. About himself, and about the life he knows he's meant to live. So when he hears that Zara's having a rough time, he wants to be the one to help. In fact, he wants to do more than that for Zara. A lot more. But first, he must prove to Zara that he's a changed man.
Review: As I've said in other reviews, it takes a certain something to have romance be believable, something that you invest in.
This is one of those books where I feel that there was a certain something missing, even though the characters and the overall plot were interesting. All the really good romance novels that I've read over the years have had depth and meaning, and I felt a bit as though that was lacking, in this book.

We come into the story already knowing that the Zara is in love with Reece. Now, this isn't something that's a problem - as long as it's executed properly - but I felt that there was just something that was a bit lacking, here. Throughout the story I felt a bit as though I was being - how can I put it - perhaps being told that Reece is in love with Zara, rather than seeing it.
Though even there, that's not quite putting my finger on it, because there are various things that Reece does for Zara throughout the novel that definitely show that he cares about her. It just felt a bit like the heart was missing, the true emotional depth that would convince me that Reece had truly fallen head over heels.
There was a lot going on in this book for the length of time that was covered, and there were a lot of jumps forward - I do wonder if the book would have benefited from a bit more time spent on those moments, on the times inbetween. Stuff happens off the page and we don't get emotionally invested in it. It's a bit like a movie on a slow fast forward.
I loved Reece as a character, and Zara too - she's a strong, beer drinking woman, and I enjoy seeing something like that. She's been through hell and so has he, so I had every reason to root for them - especially considering that the sex is smokin' hot. All over, though, it just felt like the book was lacking that little bit of magic that would have slid it from being an okay read to being a really good one.

Disclosure: I received an ARC through Netgalley in return for an honest review.
Posted by Kerri @ Whimsy and Parchment at 10:18 PM