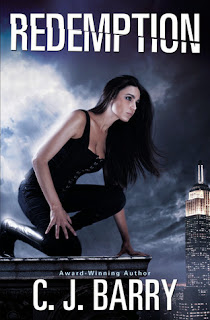 Summary:  Reya Sinclair is a Redeemer of Souls. Her mission is to give Earth’s most depraved sinners a shot at redemption just before they are slated to die. Her own redemption is on the line as she fulfills her duties, leaving a trail of dead bodies in her wake. It’s all going perfectly well until one detective takes notice, possibly bringing her salvation to a halt.

Thane Driscoll is a good cop who’s seen too many bad guys get away, including the man who murdered his father. He exacts his own style of justice, even if it costs him his humanity. A string of mysterious deaths leads him to a woman who’s not quite human and might hold the key to finding his father’s killer.

When death and shadows descend, New York City becomes a battleground for the forces of light and dark. As the body count rises and sparks fly between them, Reya and Thane race to uncover a terrible truth. Can one man hell-bent on revenge and one woman determined to save her eternal soul be enough to keep the planet from spiraling into darkness?

Review: I started off really enjoying Redemption. The main character is Reya, a woman who offers evil souls one last chance before death claims them. In the process she works for her own redemption, which plays a bigger part than is obvious at first.

The plot builds slowly in this book - I started off expecting one thing but the book went in an entirely different direction, which has both benefits and drawbacks. There was little exposition - everything is revealed in due time throughout the book, which was enough to keep me turning the page.

The main characters, Thane and Reya, are well developed and multi-faceted. Reya is a strong character, an enigma who is slowly revealed throughout the book, and I still think she's awesome. :D A kick-ass, strong woman who is fighting for her own redemption, and taking pleasure in seeing evil-doers get what's coming to them? Yes please! Yet she still has her moments of weakness, developing her from more than just a cardboard cut-out, and that's what I really enjoyed about her. I would have liked to know a bit more about her history, though.

Thane wasn't quite as well developed, but still a character I could empathise with, driven by his past and the need for justice and revenge. Through learning about his family and his history you learn more about the man. I liked the temptations that he faced, too - unlike other authors I've read, like Piers Anthony, this wasn't just based on lust and I found that refreshing.

The romance in the book was well developed too - no instant lust, which I *hate*, and it progresses slowly over the course of the book as they work together and learn about each other, each finding that their initial conclusions weren't entirely correct.

The plot broke down a bit for me in the middle, though. Past lives and ascension and dimensions are all involved, and while I find all of those things FASCINATING, they need to be well written and well thought out. It felt a bit lacking, here - there wasn't enough depth, or not enough to draw me into fully suspending my disbelief. The concepts are interesting enough, don't get me wrong, I just didn't feel like they were quite well developed enough. Because of this my interest waned a bit as I found myself thinking 'what?' and 'how?' throughout the course of the latter half of the book.

I would still say that it was an enjoyable read, but I'm not sure whether I would pick up any sequels.

Disclosure: I received an ARC through Netgalley for an honest review.
Posted by Kerri @ Whimsy and Parchment at 7:49 PM