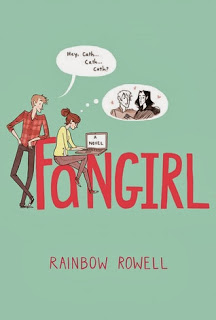 But for Cath, being a fan is her life — and she’s really good at it. She and her twin sister, Wren, ensconced themselves in the Simon Snow series when they were just kids; it’s what got them through their mother leaving.

Reading. Rereading. Hanging out in Simon Snow forums, writing Simon Snow fan fiction, dressing up like the characters for every movie premiere.

Cath’s sister has mostly grown away from fandom, but Cath can’t let go. She doesn’t want to.

Now that they’re going to college, Wren has told Cath she doesn’t want to be roommates. Cath is on her own, completely outside of her comfort zone. She’s got a surly roommate with a charming, always-around boyfriend, a fiction-writing professor who thinks fan fiction is the end of the civilized world, a handsome classmate who only wants to talk about words . . . And she can’t stop worrying about her dad, who’s loving and fragile and has never really been alone.

For Cath, the question is: Can she do this?

Can she make it without Wren holding her hand? Is she ready to start living her own life? Writing her own stories?

And does she even want to move on if it means leaving Simon Snow behind?

Review: Oh my god, this book.

I feel like I have been scooped up and shaken around and thrown back to 2001, when I was just getting into the Harry Potter fandom, and my life revolved around reading fic and everything fandom. I mainlined this book in about three hours because I just couldn't put it down.

I loved the characters in this book, and I loved the journey we go on with them, too. I especially empathised with Cath's journey throughout the book - seeing myself in her nervous ticks and social anxieties, I was rooting for her. Wanting her to be happy, wanting her to succeded. Wanting her to see her potential and open herself up to more.

Levi dragged me in almost the instant he stepped onto the page, and he won me over again several times over throughout the book. He won me over when he sleepily kissed her, even though part of me was going AHHH what are you doing?! He won me over when he was obviously convinced that he'd fucked it all up, and then he won me over again when he kept telling Cath over and over that he liked her, and when he was so willing to wait. This is a guy who not only doesn't mind waiting for sex, he doesn't mind waiting for just simple touching!

Their relationship was pure fun to read - it wasn't perfect, it was awkward, and uncertain and developed slowly throughout the course of the book. Nothing felt like instant lust, or just based on hormones, and that's what made it so much more satisfying to read. Sometimes instant lust is fun, don't get me wrong, but sometimes I want that slow burn, that lazy development that drags you in and doesn't let go.

It's just... It's one of those books that made me feel, and gives you that sense of having been told something with meaning when you reach the final page. Wren and Cath - together they've learned something, and we've seen Wren's journey without being right in her head. Cath's grown, and a page in her life closes with the end of Simon, but it's true...

(On a side note, some of the 'fanfic' bits scattered throughout are freaking hilarious, especially if you're at all familiar with FF.net or basically any fanfiction at all.)

Of course, not everyone will feel the same way that I do. I'm old in fandom years, haha! The fact that I was around in 2001 makes me kind of ancient. But I'd still recommend this book for anyone who's ever been a fan. Whether you have that gut punch of personal identification with the book or not, it's still a gorgeous, funny book that's worth the time.
Posted by Kerri @ Whimsy and Parchment at 10:58 PM